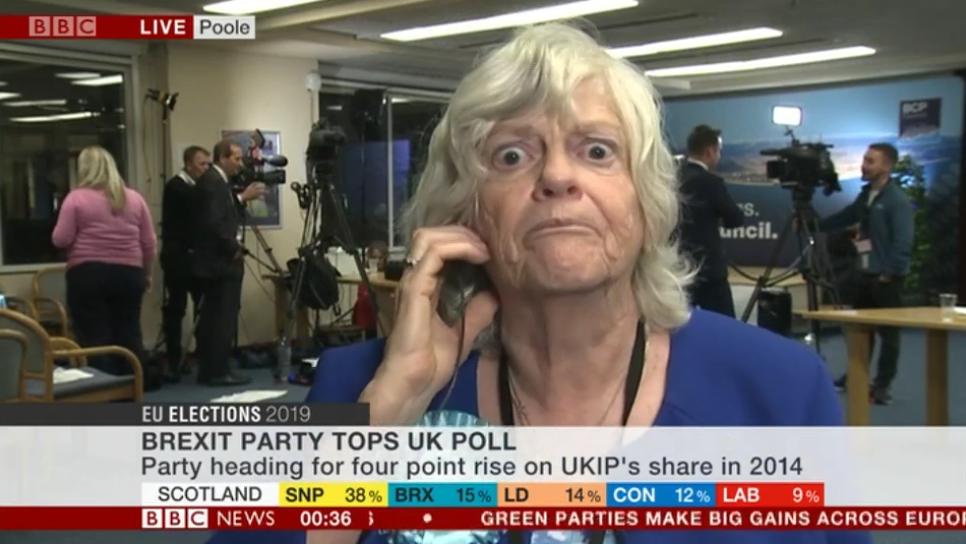 So the predictable happened.

With both the Tories and the Labour Party left floundering on account of their internal divisions preventing them from offering something even vaguely coherent, the Brexit Party came out on top.

Naturally this outcome precipitated Nigel Farage and his gaggle of disingenuous chancers indulging in the most nauseating victory march imaginable – claiming it as a victory for the “WTO Brexit” they’re unable to explain beyond the name, justification for a seat at the EU negotiations they don’t want to happen and taking the curious decision to allow Ann Widdecombe free reign in front of the media, as she inexplicably decided to punctuate each bizarre utterance with an unhinged gurn right down the lens.

Of course the media were only too happy to lap this up without question. Not to say that the Brexit Party, as vacuous and ill thought out as their narrative may be, didn’t do well. They won the most seats so therefore won the night, right? Superficially yes, but it’s far from the resounding victory they hoped for – nor is it in any way a thumbs up from the people for the deranged strain of Brexit they’re eager to push yet reticent to dissect.

First of all while their success as a new party is, on the face of it, undeniably impressive, its grandeur recedes with each scratch inflicted upon its glossy surface.

Farage, then the de facto face of UKIP, managed 24 seats back in 2014. Whatever you think of the man and his litany of deception, he is an unequivocally effective campaigner. He knows his base, his knows which talking points resonate and, most importantly, the country and his dog know exactly who he is. This stark familiarity is gold dust when it comes to political capital and the minute he walked out the door at UKIP, an act which occurred in perfect tandem to their fetishisation of the far right heralding their utter implosion, the voters were always odds on to go with him – meaning 24 seats were pretty much in the bag to begin with.

As it happened, they came out with 29. A gain of five is not to be sniffed at by any means but, with the big two parties barely maintaining a pulse as they struggle along on life support, it was hardly “the country demands hard Brexit now” message that they were hoping to receive – especially when the key beneficiaries of this monumental collapse of the status quo were Remain parties in terms of actual votes.

Though it’s not just the Brexit Party who have been keen to seize the narrative. The other side of the divide have been equally eager to spin the results in their favour – most notably the Lib Dems who point out that, going by votes rather than seats gained by the definitive Remain parties, it is actually Farage and his cronies who came up short.

However, while there is an argument to be made here, narrative wise it’s easily clouded. Do Labour votes count for Remain? Their MEPs are overwhelmingly pro-EU but the leadership are still rigidly facing both ways – so it’s a resounding shrug of the shoulders on that front. Then you look at the Tories – a Leave party manifesto wise but, in order to utilise this to bolster a pro-Brexit position, you have to get bogged down in the excruciating minutiae of whether it actually constitutes a “true Brexit” or not. Nigel certainly doesn’t think so, but do the 17.4 million?

And there you have the ultimate problem. Just as with the regrettably binary nature of the 2016 referendum in which simplicity was over utilised at the cost of our collective sanity, last night’s results simply offer no definitive answer as to what the electorate are asking for. No deal may have beaten what the Tories were offering but it didn’t beat Remain, who in turn are hamstrung by whatever the hell Labour were supposedly offering being thrown into the mix. Basically, the intolerable impasse that has plagued the country for three entire years is alive as it ever was, eating away at civil discourse at both ends of the spectrum and plunging the wedge of division so deep it’s nearly at the Earth’s core.

So where now? With Theresa May counting the days to her resignation and the Tory leadership yet to arrive at the ‘eating each other alive’ stage, what happens next is anyone’s guess. A second, confirmatory referendum seems the most logical answer, certainly being a more sensible option than attempting to massage a false equivalence from last night’s polls which are far too open to interpretation to glean anything conclusive, but with the Tories being likely to plump for a hapless ideologue as leader and Labour still failing to take any clear stance either way the chances of it getting through parliament seem slim. As for a general election, the current political climate is far too febrile for it to be looked upon as a reliable solution – with there being a significant risk that a whole new Pandora’s box of unrelenting despair is ripped open.

In any event, as easy as it is to dismiss Nigel Farage as a gruesome sideshow to the established political theatre, one thing last night did prove that there is a substantial demographic out there who aren’t interested in policy, details or indeed any of the things you need to successfully run a country. The Brexit Party have no manifesto, no policies beyond ‘leave and we’ll figure things out later, maybe’ and are so lacking in transparency that they don’t only refuse to answer substantive questions, but outright ban actually inquisitive media outlets from their events – yet they still ended the night with the most seats by far.

As with Trump and indeed the 2016 referendum, reducing political campaigning to catchy simplicity and exploitation of paranoia is disconcertingly successful. It’s snake oil salesmanship in its most stripped down form yet, rather than flogging genital enhancement cream, it’s deciding the fate of nations around the globe.

And that’s something everyone should be afraid of –  especially when that lack of detail becomes the difference between somebody you love being treated for cancer or not.