Remember the EU referendum? Sure you do, it was only two years ago. We all vividly recall the respective campaigns, it’s almost impossible not to given the vitriol and division it created. Remain had their tedious approval of the status quo, forever insistent that a failure to heed their message would be met with the most mundane torrent of doom imaginable – and we had Leave contingent, with their somewhat jingoistic proclamation that we should throw off the shackles of supposed EU tyranny and drive a suspiciously mendacious bus over the horizon, ever onward towards a previously untapped land of gumdrops and global prosperity.

As astonishing as it may seem, Remain’s cautionary screed detailing the perils and pitfalls of economic downturn didn’t quite have the same sex appeal as promises of previously unfathomable wealth and a magic unicorn on every driveway – perhaps signifying that Leave’s eventual triumph wasn’t quite the Earth shattering upset it was initially portrayed as.

Still, whether the apple cart was toppled over or not, Leave had won the PR war and victory was immediately seized upon as the inerrant “will of the people” – with anyone who dared express concern as to the feasibility of this master plan being simply dismissed off-hand as a sore loser, wallowing in their own sense of bitter incredulity.

With this in mind however, it does indeed beg the question as to why today, two years on from a supposedly infallible expression of unyielding intent, thousands of people are taking to the streets of London to decry that very notion, demanding they be afforded some semblance of control.

I’m far from infallible myself, but I suspect it may have something to do with this:

Yes, that is a real headline; and not from the preposterously backward universe next door. Horrifyingly, it’s from our own.

You likely recall similarly tiresome platitudes polluting the discussion way back in the aftermath of Leave’s victory. While naturally concerning to see figures like Boris Johnson (who days prior had taken to the stage, beaten his chest and declared a national day of independence in the event of his triumph) seemingly at a loss as to what the fuck he was supposed to do, time at least remained just about on our side. Scepticism was obviously rife, not least from increasingly inquisitive Remainers, but joyous Brexiteers were insistent that it’d be figured out in due course.

Oh Boris, you cretinous bumblefuck. You sure can craft a soundbite capable of warding off suspicion from the most suggestible of Brexit loyalists, but unfortunately empty rhetoric doesn’t have a morsel of economic value and, consequently, isn’t suitable fuel for what is undoubtedly Britain’s most drastic diplomatic move in decades. Jingoistic bluster may well have swung the referendum, but it’s of no use to the subsequent aftermath – a fact that has become increasingly apparent as the months drifted by without even an iota of tangible progress. Of course that doesn’t stop both leading parties from attempting to create the impression of success, conveniently ignoring that their respective flavours of Brexit have already been unceremoniously spat out by the EU, but they try nevertheless – though it’s little surprise that many haven’t been fooled.

It’s from that very sense of disenfranchisement that the People’s Vote was spawned. 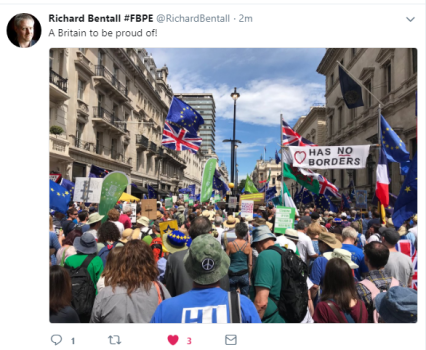 The merits of such a concept are something I’ve touched upon previously, so I’ll spare you an explanation. However, I would like to address the inevitable scorn that has already been doled out by the usual suspects of shitehawks.

You can dismiss the marchers as nutters, you can disagree with their politics – but in no way can you claim that they’re enemies of democracy, fiendishly attempting to subvert the nation’s collective will. You may rightly point out that the EU referendum was democracy in action but, as inconvenient to your narrative as it may be, today’s march is too. If Brexit really was the golden ticket to utopia it was advertised as, then there’d be no need for this. People are pissed off and justifiably so. They were told Brexit would improve their lives, heralding a new dawn of democratic accountability and a properly funded NHS – yet after two fucking years we’ve received nothing more than a few risible slogans equating crashing our economy with the desire for a decent breakfast. Ludicrous doesn’t quite cover it.

Look – you can treat the People’s Vote march with as much derision as you please; that’s entirely your prerogative. Sure, the overwhelming majority of attendees likely did vote Remain, but they won’t be alone. A smaller yet no less significant demographic of regretful Leave voters, having borne witness to the rudderless shit-show that Brexit swiftly became, will also be joining the cause – and if “taking back control” really is important to you, I’d recommend you also join the party.

Unless that is, you’d rather listen to Boris Johnson bloviate endlessly about bog roll.