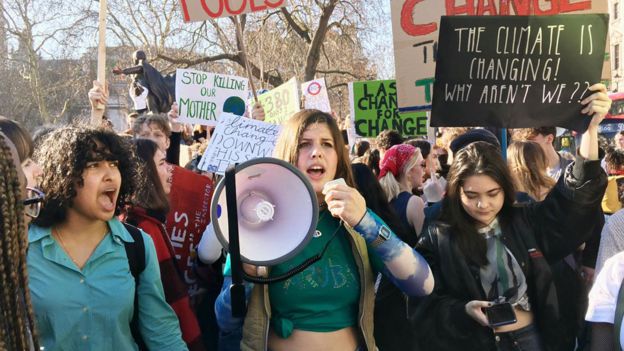 Believe it or not, when I was a mere whippersnapper, toiling away through the rigours of an aimless teenage existence, I nearly took part in a protest on school time – in the school itself no less. I wasn’t the only one either – many students, imbued with self righteous rage and inadvertently inspired by an ethics based class on the merits of non-violent protest, planned to take to the school field, refusing to budge an inch until the tyranny of switching up the form groups was revoked.

Alas, we didn’t succeed. Most likely because in the end absolutely nobody bothered. Nothing was ventured and diddly squat was gained in return, our youthful apathy proving our undoing.

So, with this in mind, seeing the scorn that has greeted students, who dared be sufficiently engaged in the world around them to a degree in which they’re willing to speak out against a looming danger in the very future they selfishly wish to enjoy, has been a most curious experience indeed. 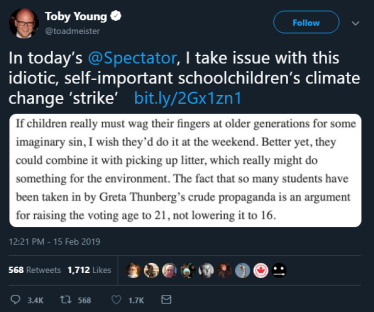 There’s being misinformed, there’s missing the point and then there’s Toby Young.

Climate change has become one of those peculiar issues in which, despite the overwhelming scientific consensus that humanity isn’t just a key contributor to but also set to suffer greatly from its ramifications, in remains a danger which simply fails to resonate with many – specifically amongst those who will conveniently be dead before its impact will be most keenly felt.

As such, it’s easy for eminently unqualified simpletons like Toby Young to bat away with around the same amount of effort in which it takes him to condition his hair each morning.

Though rather than offering even the faintest semblance of insight into detailing how the protesting students were ideologically mistaken (quite possibly because he can’t), Toby instead opts to derisively sneer, characterising them as indolent pipsqueaks who simply couldn’t be arsed going into school.

Indeed, this is a narrative that pretty much all detractors decided to spin.

Bloody kids, eh? What do they know? Those obnoxious rapscallions should know their place, specifically locked away in a modestly furnished bedroom for their 5pm curfew. That’ll teach them to have the temerity to accompany their presence in our realm with disgracefully obnoxious opinions, any line of inquiry being an unforgivable lack of respect for their more experienced and therefore wiser elders.

Or at least, you could likely understand if that was the disdainful message any young activist were to take from the snide reaction their work received. They might believe in their message, but the wizened world around them doesn’t care – to the extent that they don’t even have the inclination to address the argument, choosing instead to dismiss it out of hand on the basis of the messenger sporting a bumfluff moustache and uncontrollable acne.

It’s a concept which seems to be prevalent across the globe, rather than the ignorance simply being confined to our shores. Check out the contempt ostensibly respect worthy elders have for school shooting victims for example, responding to not only legitimate, but actually realised concerns about being murdered in school with a disparaging snicker at a survivor’s grades:

Not exactly behaviour worthy of respect, is it? Though there is a common thread to be grasped at here. Whether it be gun violence in America, or climate crimes worldwide, the greater the failing of the ruling generation, the more urgent the desperation involved in deflecting the spotlight.

While you can’t deny there’s merit to be found in a lifetime of experience, as there is valid critique to be made of the naivety of youth, seeking to stamp out the inquisitive nature of a largely untainted mind is to the benefit of nobody, save for the guilty attempting to elude the grasp of considerable shame.

Besides, when we’re dealing with problems the current crop of middle aged Earth dwellers were unable to solve, it’s the subsequent generations we’ll be relying upon to find the answers.