For the longest time Boris Johnson, the inexplicable nailed on favourite to become the next Prime Minister of Britain, had kept a disconcertingly low profile. Weeks came and went, many a proxy blustered and faltered, yet the would be emperor remained in hiding – festering away in a pool of his own risible cowardice wearing majestic robes only his most sycophantic of acolytes could see.

Yet what was the reasoning behind this uncharacteristically reclusive turn? Was it down to a genuine desire to provide a credible pitch, spending each retiring day meticulously working out the angles in order to craft a proposal which wasn’t only inspiring, but actually feasible? Or was it merely a timely moment of uncharacteristic introspection, realising that the race could be won purely through damage limitation and keeping the abominable omnishambles of human wreckage known as Boris Johnson as far away from the piercing scrutiny of public interest as possible?

I’ll let you decide – but it’s the latter.

Having finally slithered from his lair into view, Boris Johnson’s campaign to be the leader of Great Britain and Northern Ireland was now in full flow – the torrent in question being one of unrefined bullshit.

High in waffle, low on detail and tangential to the point where you could be easily mistaken into believing you were listening to the hazy mutterings of a volatile acid casualty rather than a Prime Minister in waiting; which in turn begged the question – given that Boris Johnson has been preparing for this moment all his life, how was it possible for his pitch to be this dreadful?

Through the deluge of vacuous drivel however, there was one relatively consistent feature – specifically the notion that the naive mantra of “No deal? No problem!” will be made an improbable reality by the magic of GATT 24. A much cited technicality which has found its mentions rising in tandem with the general sense of desperation as a no deal Brexit creeps ever closer.

This particular red herring has blighted the discourse for months, in spite of it being debunked time and time again. It’s been decimated so comprehensively it’s frankly staggering that, not only is it allowed to be pontificated as a credible point, it remains a disconcertingly pervasive deception.

Almost as if the truth stopped mattering a long time ago.

The sad reality is the GATT 24 swindle isn’t an isolated act of chicanery. We’ve become so hopelessly beaten down by a barrage of selective half truths and outright deceit that trying to firefight the onslaught has almost become an exercise in futility. Not only are you overwhelmed by the sheer volume of fallacious claims, each having long since spread through the populace like an especially contagious virus, you’re also up against arguably the most formidable element of the con – exploitation of personal bias.

To illustrate this point, there’s only one man you need to look to: 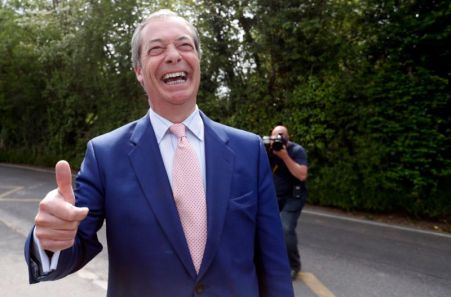 Let’s be honest – who else was it going to be?

Yes, just when you thought it was safe to open your eyes and tentatively peer out at the world around you, the monstrous visage of Nigel Farage takes an unceremonious dump upon your visual cortex. If there’s ever been a greater beneficiary of cultivating paranoia and nurturing an initial sapling of prejudice into a vast forest of proactive bigotry, then I’d rather not be witness to them for the sake of my ever dwindling faith in mankind.

Nigel’s often painted as the political equivalent of a used car salesman, schmoozing his marks with a combination of machine gun rhetoric and a meticulously crafted ‘proper bloke’ persona – but neither element would be successful without the devious selection process which identifies his targets.

The base upon which he preys can somewhat neatly divided into three categories – the disenfranchised, the misguided and the outright bigoted. This unfortunate trinity not only has its potency amplified by considerable and regular overlap at certain points, all three are underpinned by an element which sends its impact into the stratosphere – anger.

There’s nothing that fuels a desire for action more than a deep seated sense of persecution, whether it’s actually justified or simply spawned as a result of your own delusions – and Farage has long since known which buttons to press for maximum effect.

Whether he’s blathering about “betrayal” or concocting a narrative that an insidious wave of migrants are arriving from overseas to steal your job in particular and flog it for £5.99 on eBay, the message always has the desired effect. Not only planting the seeds of unbridled fury in the mind of his quarry, but inspiring the notion that their personal dissatisfaction, far from being within the realms of their own responsibility, is actually the fault of a simplistic (yet conveniently too far away to verify) boogeyman.

And it is at this point whereby the small matter of whether there’s actually any truth to this or not effectively becomes an irrelevance. They don’t just want it to be true – they need it to be true. It matters little whether their initial resentment came from a place of ill founded intolerance or a set of unfortunate circumstances entirely beyond their control – the entire spectrum is now ensnared within Nigel’s trap, unwitting pawns to whichever whims work towards his own personal advancement.

The prevailing trend of narrative superseding truth may work on the campaign trail, allowing the likes of Boris Johnson and Nigel Farage to prosper in their respective aims by spinning whatever tall tale works best within the current zeitgeist, its continued and increasing success does give rise to a criminally overlooked societal tragedy brewing underneath.

As unedifying as it is to see a fringe lunatic spewing out spurious nonsense to a select few, the threat it poses to the collective is ultimately minimal. In the case of these two men it’s different. Their reality warping trickery has granted them a lot of influence – so much so that one of them is about to become our next Prime Minister.

Boris Johnson’s rise to power has been as cynical as they come, callously tailoring his policies to whichever crowd he happens to be in front of at the time. The fact that his entire political persona stands atop a pungent mound of duplicity won’t matter to him, but it’ll matter to all those who back him in the mistaken believe he’s about to make their lives better.

And when it all falls apart it won’t be Boris who’s left scraping through the debris to salvage some sense of hope.