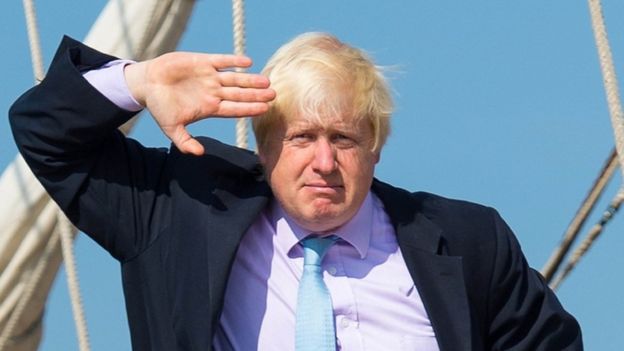 It’s been a sombre few days in the wake of the Parsons Green terror attack. The aftermath of such incidents is always a tempestuous time with finger pointing and scapegoating coming into direct conflict with calls for solidarity. Basically it’s such a clusterfuck of narratives that there’s little chance for much else to break through the haze.

Which is precisely why many were curious as to the timing of Parliamentary Potato Boris Johnson’s article detailing his vision for Brexit. The responses to this piece were largely negative, ranging from his motives being scrutinised to some questioning Boris’ grasp on reality.

Though there was support from one fellow aristocratic anachronism.

So far so predictable. Boris plunging his recently buffed shoe into an ominous mountain of faecal matter, quite possibly of his own making, is a regular occurrence and the reactions are often the same. Those possessing any semblance of scepticism will rip the limbs off his claims whilst his Etonian allies launch a staunch defence, all the while keeping a sharp blade close by in case a mutiny is required at short notice.

However, this time a rather idiosyncratic perspective emerged from the gloom courtesy of Daniel Hannan:

Certainly the nuanced position. So perverse you’d expect my reaction to be one of incredulity but, to my surprise, it triggered something – an epiphany if you will.

I’d always suspected that my intense loathing reserved for the bulbous bumblefuck was down to more practical reasons. You know, the sort of duplicitous shit that impacts people’s lives? That drives our nation down the gutter for the benefit of personal advancement? Like, I don’t know…spearheading a campaign that knowingly misled the electorate? I mean we all saw it. Boris standing front and centre, doling out deceit through the medium of charming buffoonery. Does it matter that he didn’t really believe it? That his support for Leave was entirely disingenuous?

To Boris it certainly doesn’t. After all, what place is there for integrity when you’re manoeuvring to ram a knife into the spine of one of your oldest friends? There’s no room for such outmoded notions of decency in Boris’ schedule, not when he’s got subterfuge on the brain. He needn’t worry about being held accountable to those he so gleefully deceived either. Instead, he can just slither off into the background the moment consequence rears its timely head.

You could be mistaken into thinking that this is the behaviour of a particularly nefarious piss weasel, willing to brazenly mislead the public he claimed to serve for his own benefit. Pretty deplorable shit, right?

But no, people hate him because he smiles a bit.

In my naivety, I also fooled myself into thinking that perhaps his disputed competence could be the source of the unrelenting resentment towards Boris. It’s true that many of us are apathetic towards our jobs with this sometimes spilling over into outright ineptitude – but most of the jobsworth collective don’t find themselves winging it in a position of power and importance. Fucking up in Argos doesn’t tend to carry the same ramifications as fucking up as the Mayor of London for instance. Or fucking up as the Foreign Secretary. Or straight out fucking somebody you weren’t supposed to while on the Tory front bench. Naturally this sorry tale of staggering negligence is punctuated by his continued presence within influential government positions, poking the very concept of a meritocracy in the eye with every subsequent blunder.

You could be forgiven for considering this the employment pattern of a chancer, leaving the metaphorical motif of an indelible piss stain upon each establishment he degrades – all the while being enabled by his unscrupulous peers.

But no, he’s despised because he got stuck on a zip wire that one time.

I could continue on with this rather rudimentary barrage of sarcasm but the point has been laboured enough. It does bring me onto one rather noteworthy point however.

When viewed in the broadest possible terms Hannan’s statement is demonstrably ludicrous but there is a tiny fragment of truth buried beneath the landfill of insanity. Whilst it’s certainly not the most prominent of factors, a fair portion of the ire towards Boris is indeed down to his jovial tomfoolery.

Curiously Hannan seems to posit this as fatuous reasoning but nothing could be further from the truth. This preposterous Etonian omnishambles is our Foreign Secretary. To nations around the globe he’s the face of Britain as a diplomatic entity. We don’t want him publishing limericks about a foreign leader rogering a goat. We don’t want him careening like a bequiffed boulder into a former German international footballer. We just want him to be good at his job.

Brexit has taken a gargantuan piss into our pool of friends. The Foreign Secretary will be one of the key players if we’re ever to win back approval and craft Britain into a respected and formidable entity once again.

If anyone thinks that this role can be reliably carried out by a gurning caricature who’s most prominent skill is an uncanny ability to piss off almost everyone then who am I to stop you?

I just hope you’re still laughing when it comes time to reap what Boris has sown.

One thought on “The real reason people hate Boris Johnson”